TAEHO United States – TAEHO Tanzania (Tanzania Albino Economic Health Organization) is a registered charitable organization in the USA: EIN 85-1368287.  Dawn Moeller is the founder and president of TAEHO US- TAEHO Tanzania.  Dawn has over 35 years of experience as Professional Registered Nurse and specializes in the field of Emergency Medicine.  Dawn is inspired to advocate and assist people of all backgrounds so they may achieve a better quality of life.

TAEHO United States – TAEHO Tanzania created an international partnership with the non-governmental organization Tanzania Albino Economic Health Organization (TAEHO). TAEHO is registered under the Non-Governmental ACT of 2002 and given a certificate of Registration No.00NGO/00002598 which permits it to operate throughout the Tanzania mainland. TAEHO is based in Arusha and has schools in both in the city of Arusha and 380 miles to the north in Mwanza. 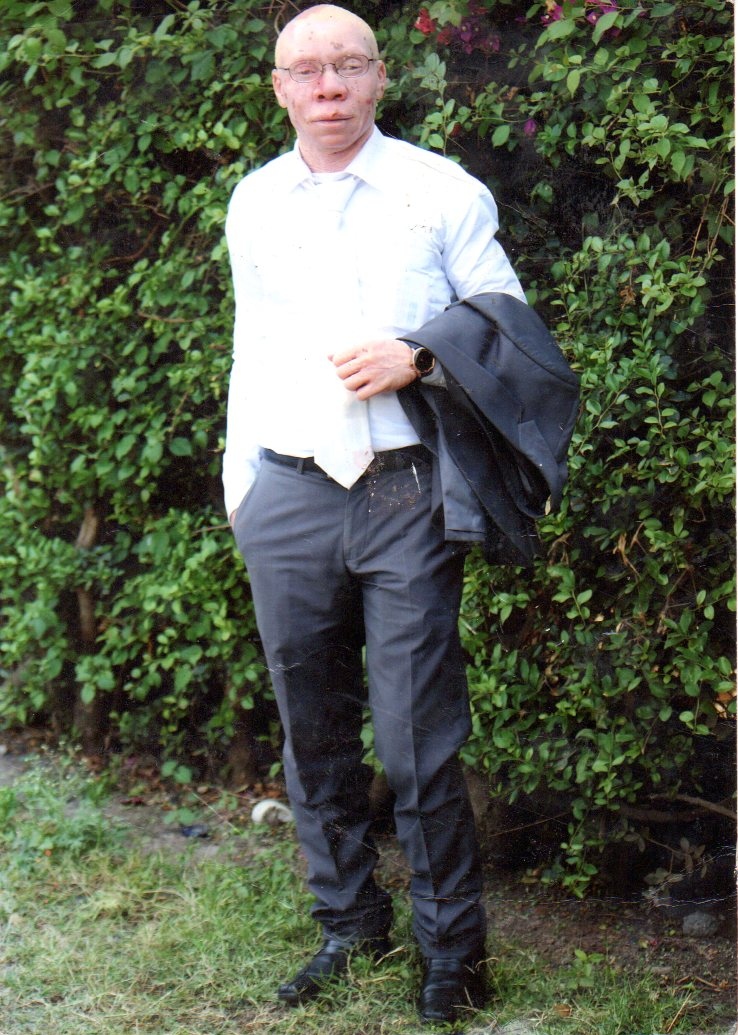 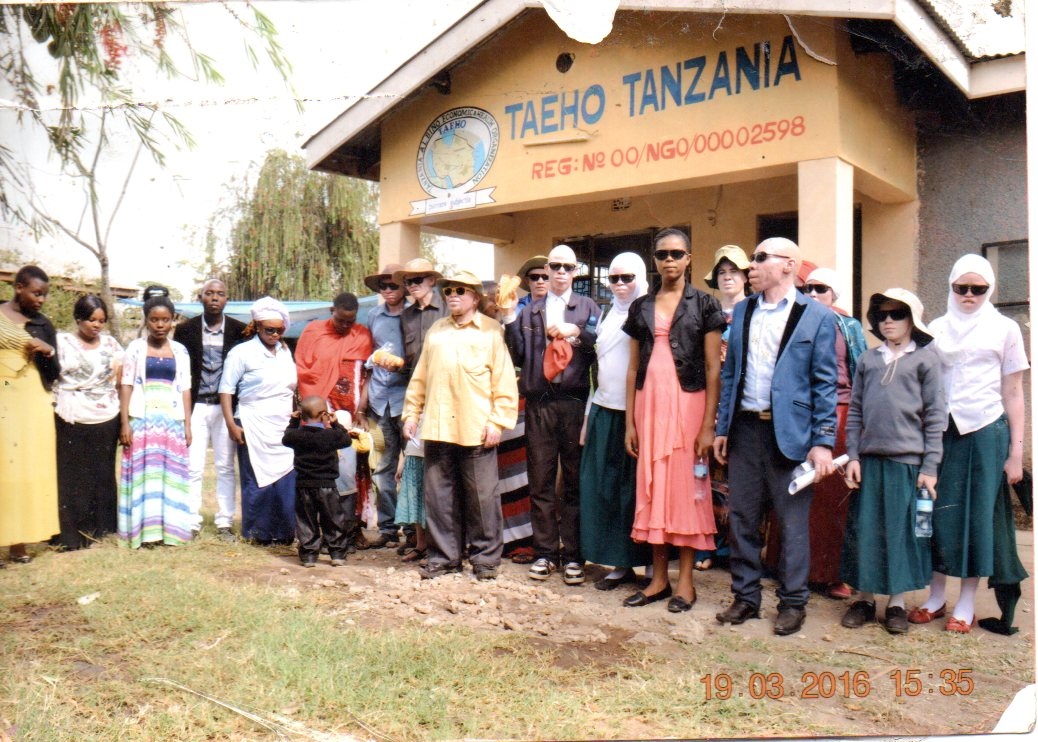 TAEHO’s vision is to create awareness and promote positive changes in society as a solution to the cruelty, stigmatization, and marginalization of persons with albinism, the disabled, and vulnerable children and women.

In 2015, I (Dawn Moeller) embarked on the “vacation of a lifetime” to witness the great animal migration in the Serengeti plains and the Ngorongoro Crater in Tanzania Africa. Tanzania is a country located on the east coast of Africa, situated next to Kenya, Mozambique, and Uganda. On all my travel adventures I enjoy meeting the local people to learn about their culture and how they live their lives.

In the city of Arusha, I was introduced to Raphael Peter Mkono.  Raphael is a person with albinism who has made a life-long commitment to help his fellow countrymen. Raphael formed the TAEHO Organization in his country of Tanzania and has been working tirelessly to create awareness and garner assistance with addressing the many serious challenges that persons with Albinism face every day. He engages and collaborates with donors, members of society, and persons with albinism to be able to make many of the programs become a reality.

As my fellow travelers and I prepared to listen to his informative lecture, my initial thoughts were “albinism is a genetic condition that occurs around the world. I know they have trouble with their eyesight and must be careful in the sunshine because of the lack of pigment in their skin.  So, what is the big deal about Albinism, here?”  Well, as I was soon to find out, Albinism is a BIG deal in Tanzania.

Raphael touched my heart when he explained how and why persons with albinism are suffering in his country. Since the day I met Raphael Mkono, I promised to help him in this very important cause.  Between 2015 – 2020, with the support of family, and many friends and colleagues, I have raised $8,000 and sent hundreds of gift-in-kind donation items directly to those in need such as: eyeglasses, sun cream, protective hats and clothing, and shoes.  I realized that though this is a great start, these efforts are not nearly enough.  This compelled me to form the TAEHO United States- TAEHO Tanzania charitable organization late in the 2020 year to make a greater impact.

Albinism is a rare genetically inherited disorder. Both parents must carry the gene to pass it on, but they may not have albinism themselves. It is characterized by hypopigmentation of the skin, hair, and eyes, and impaired vision, due to a reduced or lack of the skin pigment production called melanin.  Melanin is a photo protective pigment. It protects the skin from the harmful effects of ultraviolet radiation (sun) exposure, resulting in issues such as photophobia (light sensitivity), decreased visual acuity (poor vision), extreme sun sensitivity, and skin cancers.

Albinism has a worldwide distribution and affects people of all ethnic backgrounds.  Albinism affects fewer than one in 200,000 Americans with a world average of one in 20,000, but the incidence is the highest in the world for the countries of Tanzania and Zimbabwe; one in 1,000 to one in 1,400. 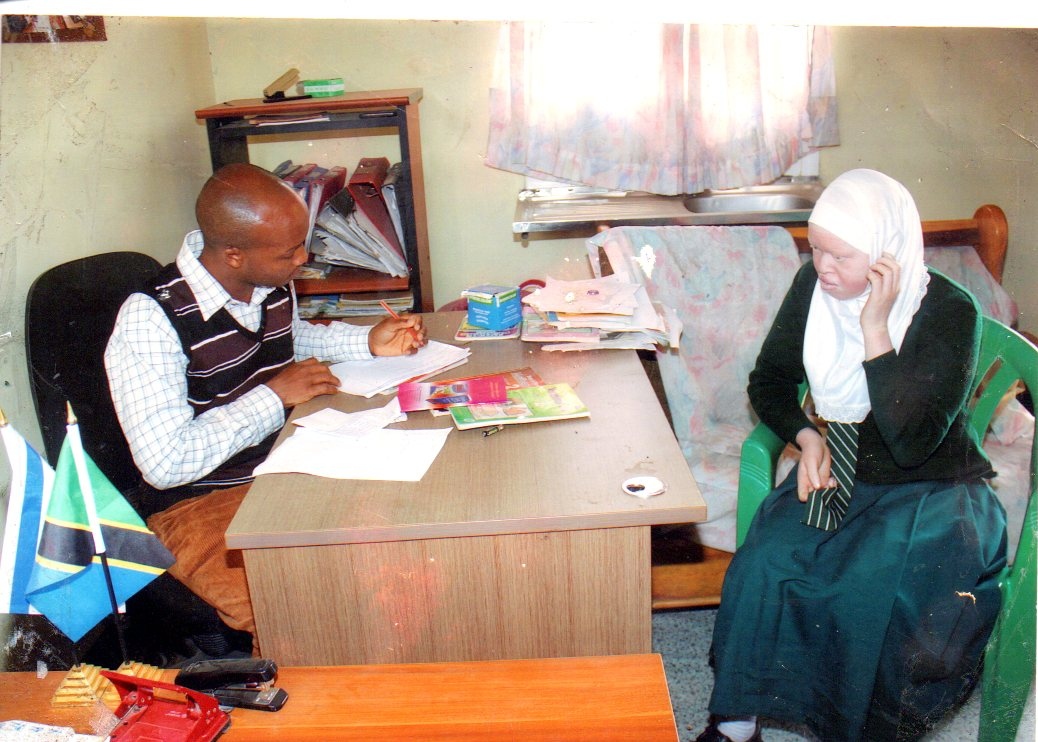 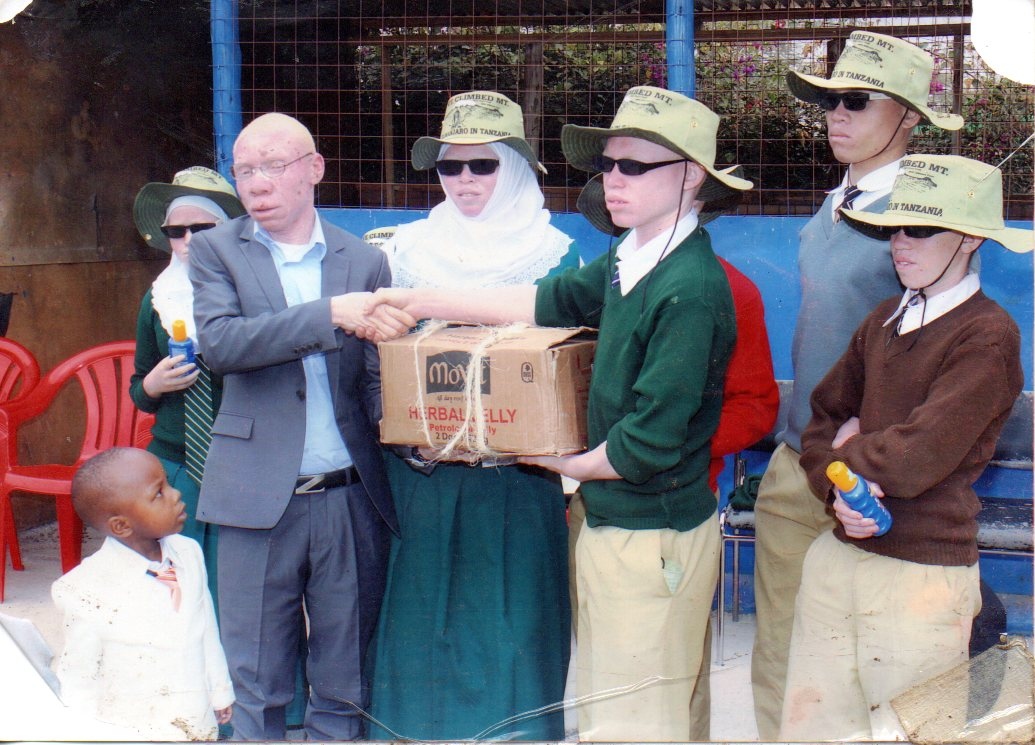 Albinism affects the structure and pigmentation of the eye, causing visual impairment ranging from mild to severe. Many people with Albinism are legally blind. All have extreme sensitivity to light.

People with Albinism are much more susceptible to skin cancer.  In Africa, the incidence of skin cancer in the general population ranges from 7.8-16%.  In comparison, Africans with albinism, the risk of developing skin cancer can be as high as a 1000-fold. Most children with Albinism in sub-Saharan Africa as young as 10 years-old already have some form of early-stage skin cancer. The life expectancy of African persons with Albinism to live beyond age of 40 is at an appalling 2%. Due to lack of knowledge, many people do not know what dangers they face and how to protect themselves. 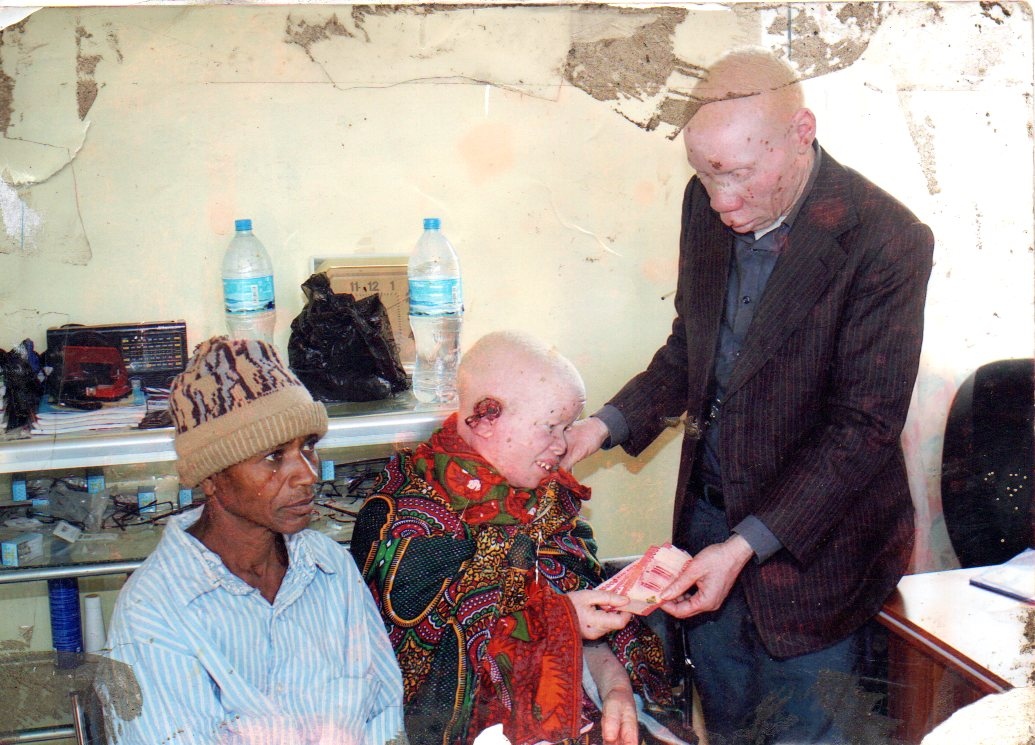 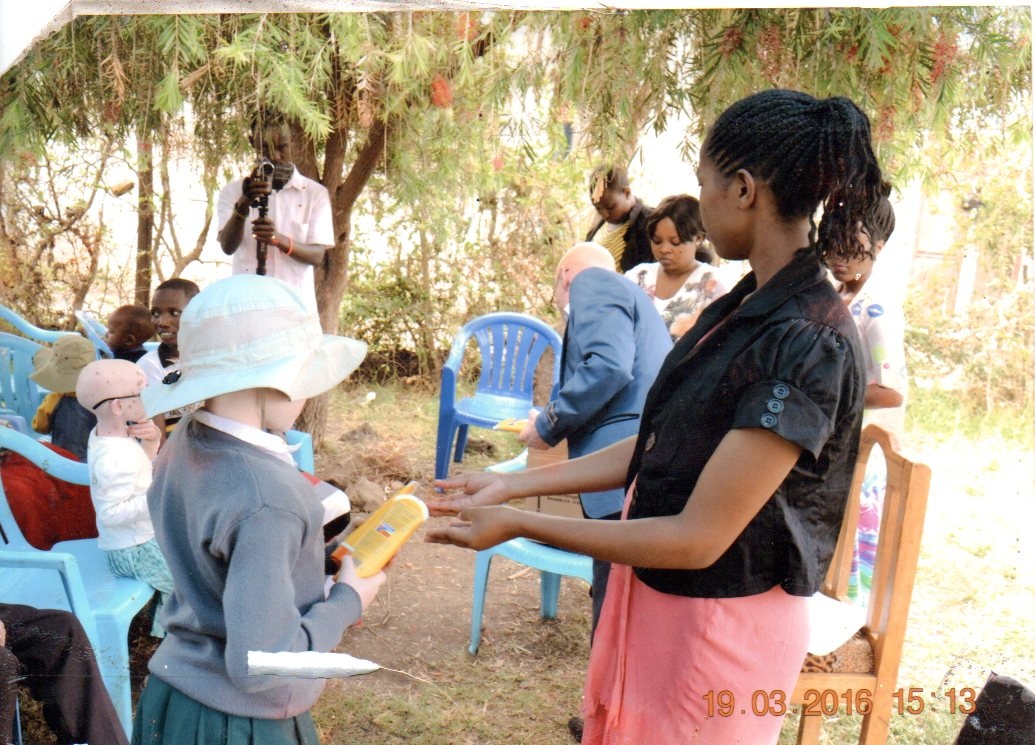 The management of skin cancers for persons with albinism in resource limited countries like Tanzania poses major challenges.  The outcome of treatment of skin cancers has been poor because many of these patients do not seek care early and present to hospital exhibiting symptoms of advanced or end-stage disease. This is partly due to lack of awareness on the importance of early reporting to hospital for early diagnosis and treatment.
The access to simple resources to protect their skin can also be quite a challenge. Sunscreen products are primarily available in the popular tourist areas or found in the larger towns and major cities.  The rural population has almost no ability to gain access to sunscreen.  If people are fortunate enough to find sunscreen, it is very cost prohibitive.  When faced with the choice of buying food to feed the family or purchase sunscreen, the obvious priority is to choose food over skin protection.

The Lives of Persons with Albinism in Tanzania

There is a saying in Tanzania that Albinos never die, they just disappear because the belief is that they are “ghosts” and cannot die.  Some people believe that they were born to cursed families. There is often shame and stigma associated with albinism as well as with other physical disabilities.

Being a person with Albinism can be a death sentence for those in Tanzania.  Since 2006, over 71 people have been killed there and estimated another 57 have been attacked. Children and adults alike are at constant risk, even from their own family members, of being killed or dismembered simply because of their skin color. Persons with Albinism have suffered widespread persecution in Tanzania where disturbingly, witch doctors say magic potions made with hacked off albino body parts can bring good luck. A complete albino “set”- ears, tongue, nose, genitals, and all four limbs- can sell for $75,000. As a result, many of Tanzania’s 17,000 persons with albinism have been hidden away by the government.

Because they live in great fear, the children don’t often go to school.  They are kept at home to be safe.  Persons with Albinism almost never leave their home without an escort for fear of being attacked. Because of this imposed isolation, gaining an education is a challenge. Without adequate education or job training, persons with albinism are plagued by poverty and deprivation. 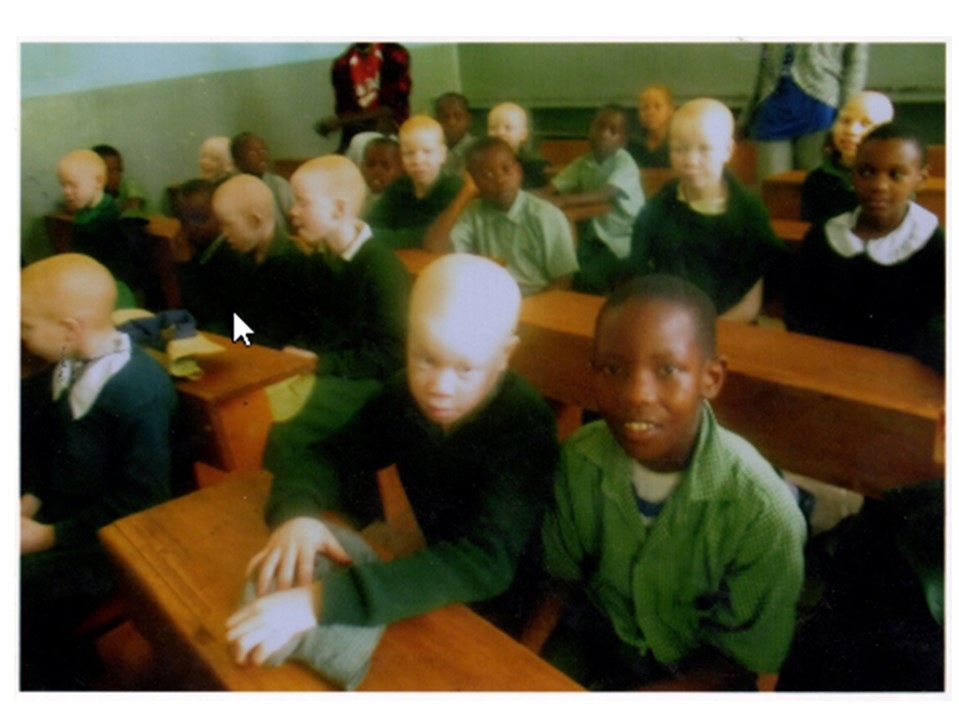 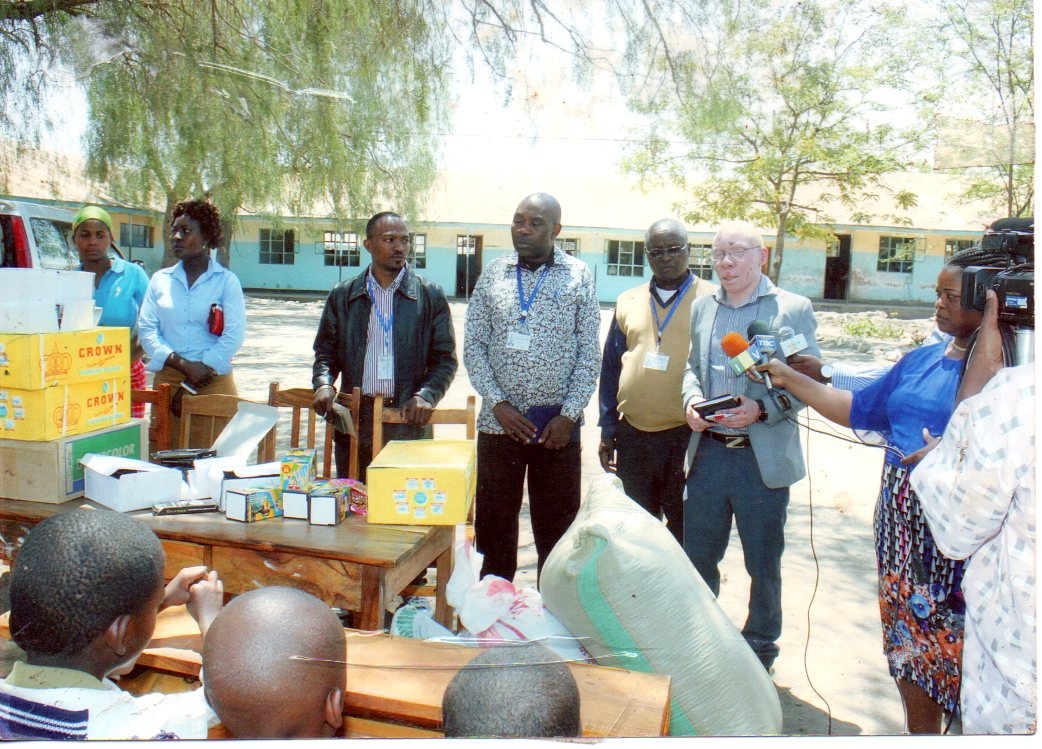 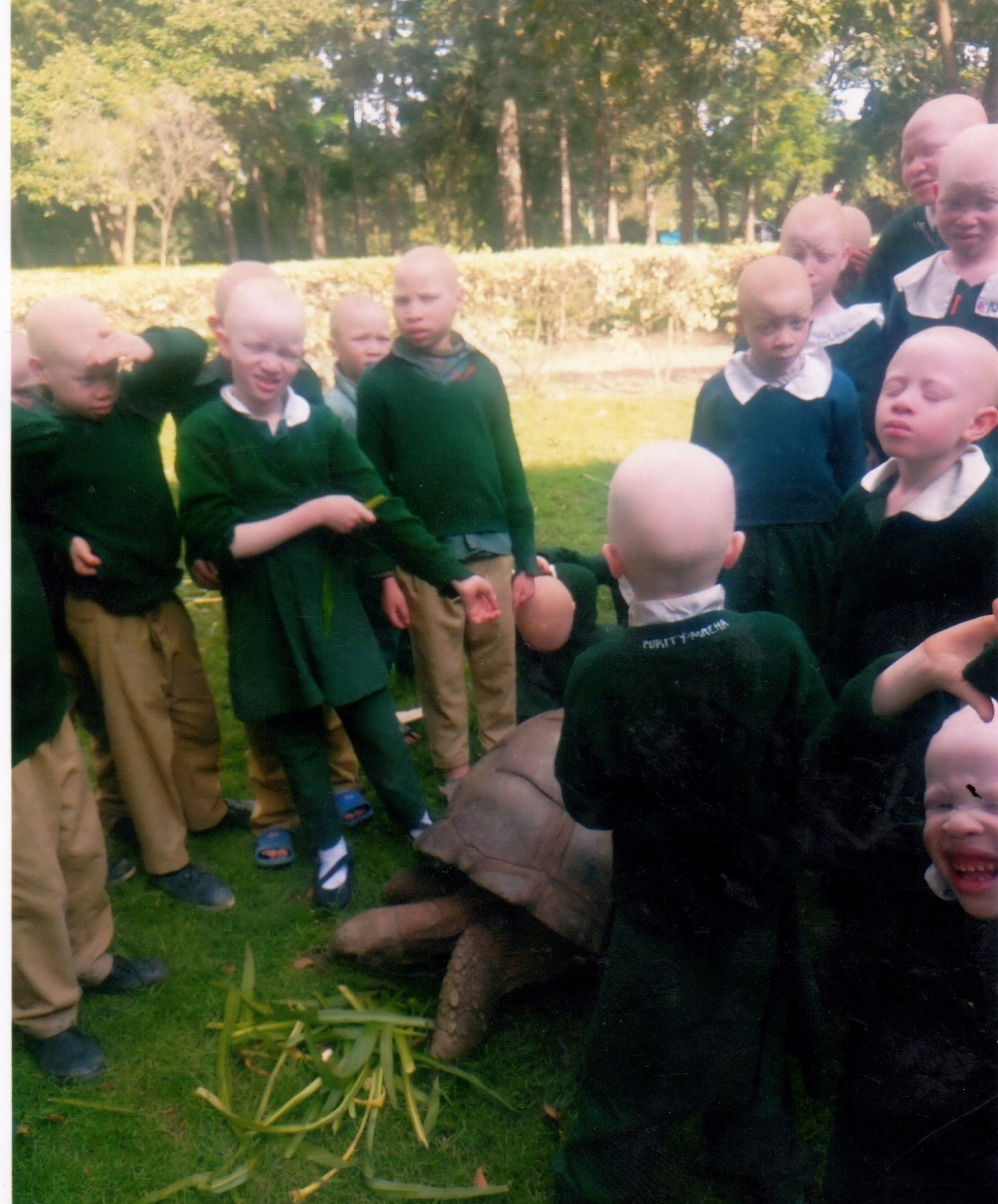